this fun little guy is intended to chronicle my adventures working on my first comic, passerines! it follows two guys who are gender as they go on a normal road trip where nothing bad happens :) note that this page makes use of spoilers - hover over highlight text to reveal what it says!

working on some character stuff today! i started by writing down some little details about robin and starling - for example, what their room looks like, what they like to carry around, and their favorite article of clothing - then started working on their backstories. robin's came pretty naturally to me, but starling's will be a challenge. i think he needs some more outgoing or interesting character traits - we'll see :)

i'd also like to keep working on the outline for the first chapter's sketch draft. i just really want to share some of my work with my friends, and maybe all 0 people who read this site!

hiiiii besties it's been a while!

so, no, i have not stopped thinking about passerines. have i stopped working on it? yes. i started writing the script at the beginning of november, right after i dropped the tallahassee site, but my workflow just was not doing it for me. i got distracted by school, holidays, and mental illness. buuuut i've been chipping away at other, smaller comics projects, and i think i've figured out a new way to actually make the damn comic!

i'm going to start scripting on notebook paper and thumbnailing instead of trying to draw the whole thing out in detail. i will also probably draft on paper, because it is dozens of times faster. when i was working on my ap lit midterm, i churned out pages SO much faster in my sketchbook than in medibang. all i'd have to do from there is scan and upload the sketches, then ink and color digitally (which tends to look a hell of a lot nicer). although, i have considered doing my color traditionally, and i've been getting more experience with my colored pencils... decisions, decisions...

oh, and i've gotten a reference sheet down for the two of them! they're chillin, just vibin together, bein' real cute. there will be design notes written around them. once i'm done, i'll probably share it here and on toyhou.se - all i have to do is the writing. next up will be the rat gang. i solemnly swear to update this more often.

"i solemnly swear to update this more often" HAHAHAHAHAHAHA

college emotions are kicking my ass, but at least i still have blorbo and blorbette. i haven't done scripting, but i have been working on some planning stuff these past few days. i laid down some rules for the visual design of the world, complete with some illustrations! 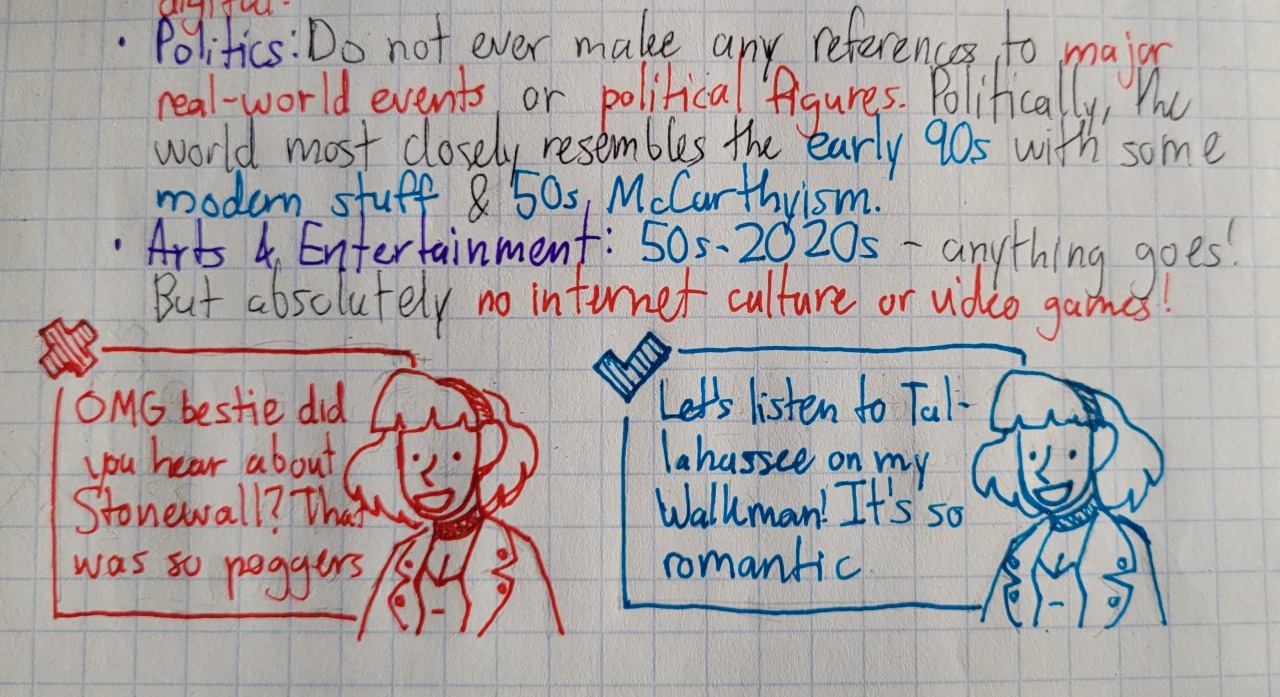 i also got the behavior of rat gang to a place where i could really be happy with them. spoilers ahead, but...

i also saw everything everywhere all at once, which is an AMAZING movie btw. that plus a visit to the hirshhorn over the weekend is encouraging me to get more creative with, well, everything! but especially making more abstract environments and plot events. (if you're in the area, you have GOT to see the weather (exhibit)! i enjoyed it a lot more than the other one there, although i didn't get to check out the timed entry one.) you'll all see the fruits of this inspiration when i have more that's ready to share. for now, have a good one! halcyon signing off :sparkles:

another long wait, but i do have some good news! outlining is coming along pretty well. i'm actually dogsitting for the neighbors, and rudy (that's the dog!) is pretty laid-back, so i'd like to try and work on a practice comic while i'm here. i have some dialogue written out, and trust me, you guys'll be the first to see it!

i've also gotten some *gorgeous* art of rat gang from art fight this year. it's really getting me excited to make more about these guys! bye for now :)